continues from part one

I had become doll number 4. Living in a cabinet in a basement. I was captured by Mr. Grey and put on display along with three other girls. I had been on display for a week now. I can't be sure though. Nothing in this basement tells the time. No watch, no calendar. No windows showing daylight. There was only a mirror. A huge mirror where I could see me and my sisters on display. They are not my real sisters of course, but as we apparently share the same destiny I had chosen to consider them my “sisters”. - And I don't really know the name of my captor, but as he always was wearing gray – I called him Mr. Grey.

I have not slept. I have not been able to sleep. I mean it was not an option. My body has been awake ever since I woke up in the basement, and there was nothing I could do about it. My eyes have been blinking automatically to keep my eyes moist. I can't close them at will. I suppose my organs work automatically too. I have been fed through an IV line, and I have received some drug that way also.

When Mr. Grey in the past few days was not here, I had nothing to do - except to look at my sisters and the furniture in this room. Through the corner of my eye I could see the staircase where I must have entered the room carried by Mr. Grey. The other end of the place was occupied by some apparatus which purpose escaped me. There was some shelves and cupboards too. And a desk with the PC, where Mr. Grey worked from time to time. In front of me was the table, where I was placed and examined the first time. And on the opposite wall the mirror.

In the days after I was placed in this cabinet I discovered Mr. Grey's routines. - He opens the door to my cage. He changes the waste bags. He checks the IV bags. Checks my temperature and pulse and touches me here and there, moving a leg or an arm or maybe a finger. Listening to my heart with stethoscope. - Examining my condition I suppose. And he conducts the same procedure to all of us. All the time taking notes and plotting things into his computer. If I am right, he does these things every night before he goes to bed. And then every morning he shows up looking like he is coming fresh from the bath in a nice business suit though not always the same gray suit – but always gray. He looks closely at us one by one with a little smile. Like if he is just enjoying his unique collection of living immobile dolls. And then he marches off leaving us for several boring hours.

The only entertainment is the dildo-thing between my legs. It seems to have a life of its own. My guess is, that it has been programmed to function at random. The intervals between working are long – but varying – like at least one hour but maybe up to three. I tried to count seconds, but could not hold the concentration long enough. First I found it very much intimidating, but now I welcome the buzzing whenever it comes. And I wonder which rhythm and movement patterns will seduce me this time. Actually I feel a little ashamed letting myself enjoy this mechanical rape. Thinking of my family and friends who must be beside themselves not knowing what has happened. If I am alive or dead. In the meantime I am acting like another slut welcoming the orgasms inflicted on me by my captor.

There was not much entertainment in these routines of Mr. Grey's, so most of the time I was on my own – not being able to do anything but to think. Sometimes sending up my prayers for the rescue. Sometimes daydreaming about some cute hero releasing me and giving me some antidote or something. Maybe “waking me up” with a passionate kiss while he carries me out to his red sports-car. Though in the last few days I have felt increasingly indifferent to my situation. My panic had faded away. I feared that “relaxed” meant a lot more than what you usually put in the word. Like I almost didn’t care what would happen to me. - No, that is not true, but I was really confused, and I blame the drug. I had come to the conclusion, that the blue stuff in the other IV bag was doing something to my mind. I could still “think” but when I should be furious and terrified I was almost calm, when I should miss my family and friends I had become more or less indifferent. I knew how I should react, but mostly I was in peace with my situation. That was not right! - Lately I had discovered that my body wanted badly to be touched. Whenever Mr. Grey touched me, my body wanted more. That was embarrassing! It was like I was split up in two persons. My brain knew what would be right, but my body chose differently.

Anyway, today was very different. First Mr. Grey assembled a new cabinet and put it up next to me. Guess what! - It had number five on it. So now I would expect a new sister to arrive. After accomplishing this he put up a professional looking camera on a tripod in front of cabinet number one. There were photo lamps too. He opened the door and took a series of snapshots while changing the girl's position slightly – adjusting the lamps – and even refreshing her makeup. When finished he closed the door, removed the photo gear and made himself busy at the PC.

My first thought was that he was making some ransom notes and needed pictures to prove he had the victim. But then why would he bother to make us look pretty? And why would he let two months pass before making contact? - No, it was much more likely that he wanted us to look our best to make the best price. He was going to sell us! - Sell us to somebody who wanted girls looking in a certain way.

Suddenly everything made sense to me. I am red-haired. My sisters are blond, auburn and black-haired. We are different body types but all well trimmed. I thought of the dolls I played with when I was a child. Actually I still had them in a box in the attic. They were different types too, and I dressed them differently and gave them different roles in my play. I wondered if we were like dolls on stock. For sale for the right buyer and the price. I ought to be screaming at the thought. Well, at least mentally. But in a strange way I felt that I didn't care anymore. Not really anyway. If only I could talk to my sisters and ask if they were feeling the same way...

I was abducted on a Sunday. If I was right about the days then today was also a Sunday. That made sense, since Mr. Grey stayed most of the day in the basement solving many tasks, in addition to assembling the new cabinet, taking photos of sister No 1, and of course maintaining his dolls...

So, Monday began as usual. He checked us out, happily smiling. And then leaving probably for work. Time passed. I was thinking I should be bored, but it seems, I had developed a waiting mode, where I didn't think coherently. I just existed – kind of. I must have adapted - If not accepted that there was nothing for me to decide – nothing to perform – nothing to do at all. - Except sometimes longing for Mr. Grey to touch me – or the dildo-thing to surprise me... 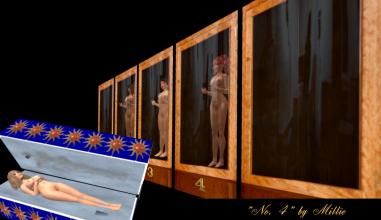 That evening Mr. Grey was elated. He arrived with a broad smile on his face and he kept smiling all the time while he was with us in the basement. The reason was obvious as he first of all picked up a box and placed it in front of No. 1. It looked like a gift box just more solid. It was almost the same size as a coffin, but sky blue with little stars everywhere, and very elegant, and when he opened it there was foam with an indentation in the shape of a human.

In no time he had sister No. 1 placed in the foam while the IV bags were removed and placed in a small room in the foam on one side of her. Mr. Grey fixed up her hair and fussed about her for some time until finally he was satisfied – all the time he was smiling happily.

When he put the lid on, I could see a corresponding recess in the lid foam - however equipped with tubes for nose breathing. She would be completely encapsulated but still able to breathe. Even from my angle I could see she looked very beautiful. With the hair framing her perfect face. She looked exactly like one of those collector dolls, the adults use to buy and never let their children play with. My sister was naked though. The dolls used to be sold wearing beautiful clothes. - The lid came on, and Mr. Grey took a key out of his pocket and locked the box.

Only now, he began the maintenance of the other sisters and me. Back to routine...

When he examined me and my bodyfunctions I almost exploded in an orgasm. And I think he somehow could see it even I didn't move at all, because his smile broadened and he looked at me and whispered “your turn will come, sweetie – your turn will come!” - And he nodded reassuringly. - So I pictured myself in that box. What would that feel like. And who would open it. For what purpose was I bought? - A collector's doll just to be looked at and admired? - Thoughts that should scare me. But which at that moment seemed almost acceptable. Actually, I was a little jealous of sister 1 - for her there was something new.

I would be waiting in my cabinet. - For how long? - And then what?

If you've enjoyed this story, please write to the author and let them know - they may write more!
back to
Dollstories