Dolls on the big (and small) screen, these titles have one thing in common, they all feature dolls as one of the main characters. If you know of any others please let me know.

Love Object is a 2003 film written and directed by Robert Parigi. Kenneth (played by Desmond Harrington) is an efficient but socially awkward technical writer who develops an obsessive relationship with Nikki, a rubber sex doll he orders.

He develops a relationship with "Nikki," to the point of talking and even arguing with her. Kenneth begins to display bizarre behavior, and starts to feel stalked by Nikki. Their relationship evolves into a love-hate situation, and at one point even beats the doll.

At work, Kenneth meets Lisa (Melissa Sagemiller), a temp, with whom he begins to develop a relationship. Kenneth encourages Lisa to resemble Nikki by cutting her hair the way Nikki has it and wearing the same clothes Nikki has.

As his imagined relationship with Nikki becomes more sinister and dominating, Kenneth resorts to cutting up and disposing of the doll. Lisa eventually becomes aware of Nikki's existence, and promptly breaks up with Kenneth.

Later, a bound and gagged Lisa is discovered by Kenneth's landlord, and Kenneth bludgeons him with a hammer. Kenneth then begins to transform Lisa into the doll. He dresses her up in Nikki's clothes, straps her down, and begins to replace her blood with embalming fluid.

Lisa manages to escape from her restraints and attacks Kenneth with a small statue, rendering him unconscious. At this point the police arrive, and when they see Lisa over the unconscious Kenneth they shoot her. Lisa, wearing Nikki's clothes, falls dead in the crate Nikki came in, thus completing her transformation. Kenneth is never accused of the crimes.

Much later, he re-orders another Nikki. While buying flowers for Nikki, he notices the attractive brunette at the floral shop. The viewer is left to assume the Kenneth's obsessive love triangle cycle will start all over again.

Lars and the Real Girl is a 2007 American dramedy film directed by Craig Gillespie. The screenplay by Nancy Oliver focuses on a shy, lonely, socially inept young man who develops a relationship with a life-sized, anatomically-correct doll he orders online.

Lars Lindstrom lives in the converted garage behind the house he and his brother Gus inherited from their father. His pregnant sister-in-law Karin's persistent attempts to lure him into the house for a family meal are usually rebuffed, and on the rare occasions he accepts, their conversation is stilted and he seems eager to leave as soon as he can. The young man finds it difficult to interact with or relate to his family, co-workers, or fellow parishioners in the church he regularly attends.

One day Lars happily announces to Gus and Karin he has a visitor he met via the Internet, a wheelchair-bound missionary of Brazilian and Danish descent named Bianca. The two are startled to discover Bianca is in fact a lifelike doll Lars ordered from an adult website. Concerned about his mental health, they convince Lars to take Bianca to Dagmar, the family doctor who is also a psychologist. Dagmar diagnoses Bianca with low blood pressure and advises Lars he needs to bring her in for weekly treatments, during which she will attempt to analyze him and get to the root of his behavior. She explains to Gus and Kari that this is a delusion of his own creation and for his own reason and purpose, and she urges them to assist with Lars' therapy by treating Bianca as if she were a real woman.

Alex (Albert Dupontel) and Claire (Marianne Denicourt) are living a boring and tedious life after years of marriage. They do not communicate to each other anymore, and Alex is almost speechless at home and without motivation and inspiration in his work as a former successful photographer. When Claire decides to leave him to live with her sculptor teacher, and Alex, completely wasted, accidentally orders an expensive and desirable sex molded doll called "Monique", his life changes completely. Alex falls in love with Monique, making all his fantasies come true, while his privacy is respected. His behavior affects the lives of his closest friends and Claire.

This witty and original comedy plays with endured and routine relationships that are completely exhausted, without communication or sex life. Alex represents those men in middle-age crisis that keep their boring and tedious marriage without any further emotions or dialog, actually accommodated to the situation. Claire represents those women afraid to give a step ahead in life, balancing between a stable finished relationship and the fear for new feelings and experiences. Monique represents the new, the refreshment of a wasted life and the dream of most "Alexs". The director Valérie Guignabodet shows a great sensibility, approaching this delicate theme in a funny and neutral way, never being corny or accusing or defending who is right or who is wrong in this battle of sexes.

A life sized doll lives in a shabby apartment in Tokyo , her middle aged master talks to her, puts her in the bath and makes love with her every day after he returns from work. This routine life is disrupted when fantasy turns to reality. One morning the air doll suddenly comes to life, filled with a soul.

Adapted for the screen by Kore-eda himself, the film tells the story of a life size AIR DOLL that develops a soul. On exploring the world around her she soon falls in love with Junichi, a video store clerk. Just when everything seems perfect an unexpected turn of events throws her fragile existence into turmoil. At the core the film is a love story which explores the profound questions of human existence, Where do we find meaning in our own lives? What ultimately makes us human? 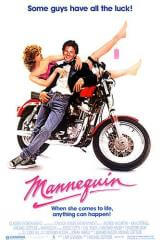 A young artist, searching for his vocation, makes a mannequin so perfect he falls in love with it. Finding the mannequin in a store window, he gets a job there and his creation comes to life.

2015 British science fiction series based on Real Humans, the series explores the themes of artificial intelligence and robotics, focusing on the social, cultural, and psychological impact of the invention of anthropomorphic robots called "synths". Wikipedia